The last weeks have been rather busy for us, and so we didn't have the time to update the blog. Don't worry, the hedgehogs haven't been neglected and they seem to be doing well, although we do have a number of changes to report. Things are getting back to normal with us, so we hope to be able to post more regularly, with news of our prickly visitors.

Our first news is about Nightshift. This is the third year she has been living in one of the nest boxes in our garden. She moved back into 9c when she came out of hibernation at the end of March, and has been there almost every day, until about a fortnight ago, when she seems to have moved out. We had a period of a few days when we were overbooked in the nest boxes. We saw 9a, 9b, 9c, 9d and 9f were all occupied for several days, and we were surprised to see in this capture that Nightshift had a visitor for a couple of days, although they didn't arrive or leave together:

We were surprised that for the same few days we also had two residents in 9b, one of whom we are sure was "little" Alfie from last year, due to the way in which he hangs out of the doorway eating mealworms.

We also had two hedgehogs staying in the semi detached nest boxes in the boiler room at the front, Indy in 9f (left) and another hedgie in 9f (right).

Since then things have quietened down somewhat. We still have Indy in 9f, and Alfie in 9b. 9a has been empty for most of the time since then, although we did have a visitor for two days when we had heavy rain in the evening.

Nightshift has moved out of the garden, and 9c was empty for quite a few days, although we do have a guest in 9c at the moment.

We are still getting lots of visitors each evening, and regularly have three or four hedgies in the garden at the same time, with associated bulldozer moments.

So, what has happened to Nightshift? We think she is still visiting, as there is one hedgehog who looks very like her, but we haven't been able to identify her for sure. We wonder if she has moved out to have hoglets, as this is what happened with her last year - she moved out at the time we were expecting her to give birth. We saw nothing of her for a week, then she started visiting more regularly, and then she moved back in bringing two babies with her. This was quite late last year, but we saw the hedgehogs getting amorous in April, so it is possible for her to have had a family. We will just have to wait and see, but we hope she is doing all right.

Well, the blog has been restarted, we just need to get back into the swing of updating it regularly. Watch this space...
Posted by twosiehedgehog at 16:27 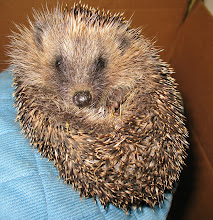